Porter “Oz” Reed knows as well as anyone the damage words can do. So while he’s not looking for a relationship, he has no problem standing outside his apartment looking intimidating as his sweet neighbor finally kicks her verbally abusive ex to the curb. Just in case. But it’s Oz who’s punched in the gut when, at that precise moment, his ten-year-old nephew Logan is dropped on his doorstep.

After finally ditching her ex, Riley Rogers is ready for a break from men. But her plan to stay single takes an immediate hit when Mr. Tall, Dark and Handsome from next door comes knocking, panicked at the prospect of caring for a nephew he never even knew existed. Riley’s only too happy to help. After all, Porter had her back when she needed him. And she feels a kinship with Logan…whose story hits a little too close to Riley’s own.

As they team up to make Logan feel safe in his new environment, Riley and Oz quickly fall hard for the boy, and each other. But they’ve barely adapted to their altered lives when Logan shares a secret that changes everything—again.

** Shielding Riley is the 5th book in the Delta Team Two Series. Each book is a stand-alone, with no cliffhanger endings. 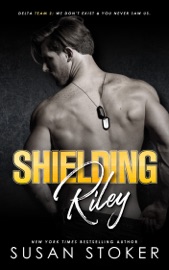