Of all the Fallen, Raze’s hungers are some of the darkest and most insatiable. His brazen seductions cost him his wings, leaving him soulless and immortal, the most dangerous of seducers. He has roamed the earth for eons, hunting the rogues of his kind and protecting the humans who provide him with blood and sex. He is content with his life and the transient pleasures that flow through it... until one night and one woman change everything. Kimberly McAdams is smart, beautiful, and wealthy. She can have any man she wants, but the moment she sets eyes on the lethally stunning Raze she knows he’s the man she needs. As one searingly erotic night burns into something deeper and far more vital than either of them expected, an adversary from Raze’s past sees a chance for revenge. Twisted by hatred, she will take from Raze what was taken from her—the precious gift of love. 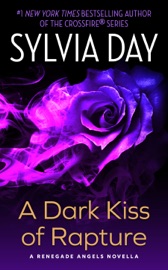